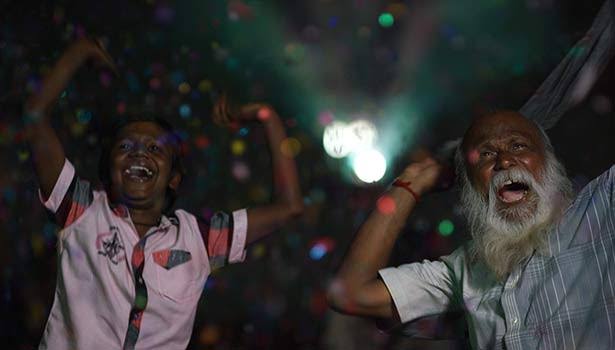 Madhumitha Sundararaman’s camera is always curious. It gets into the nooks and crannies of stuffed households, makeshift green rooms and the overarching mood of a town’s festival with the same eagerness. Beginning in Virudhunagar, the film – KD Engira Karuppu Durai – is set in and around Sengottai, known for its lush rice fields, hills and the perennial waterfalls of Kuttralam. The natural beauty of her frames also complement the beauty in her characters. They bite, they complain, they rant, but they are of pure heart. Maybe the injection of realism in recent Tamil cinema is to blame as one keeps looking for tragedy to strike, Madhumita’s film though coasts along to match the welcoming breeze of these locations. A tracking shot informs us of our principal character, played lovingly by Mu Ramaswamy. In his own narration, he briefs us about himself and shares with us how nonplussed he feels about his surroundings. No surprise, his family is planning his thalaikoothal. He is in coma. Death is at the door, quite literally, and all he wants is to break that door and steamroll past it.

And that he dutifully does. A geriatric life turns nomadic as Karuppu Durai elopes with little cash and a flashlight, as if to search for the missing joy in his life. He meets Kutti (Naga Vishal), an orphan living in a temple, whose wit is in constant competition with his irreverence. The two strike up an unlikely pair to live out their abandoned selves. But how unlikely a pair are they? They aren’t really. The age difference probably sits in the high 70s but they are of the same ilk. Kutti not being in school is a bogey that is ever present in the subplot. But it turns into a double whammy when, in a remarkable piece of writing, we learn that KD is illiterate. They share a whole lot of qualities that makes Madhumitha’s film look like the same life lived in two different directions. KD is smart, wisecracking and comes with his own set of survival skills. Kutty is smart, wisecracking and comes with his own set of survival skills. Both have been cast off by their respective families and learn from each other what they are missing. Even in its most emotional moments, KD (a) Karuppudurai introduces a lighter moment – like Kutty exclaiming that he thought family was supreme but listening to KD’s woes, it seems tortuous.

At a plot level, KD (a) Karuppu Durai is KD’s modest bucket list being struck off one by one. But it is more than that. It is about how much the film breathes in its dialogue free moments. Like how Madhumitha films the Kuttralam vizha, in aerial shots and crowds experiencing a day of fun, forgetting their routine sorrows. She captures the minutiae of everyday lives of unnamed characters, every collection of scenes in her film contain a whole short story. It is in the mirror image of KD finding and spending time with his childhood sweetheart Valli, drawn by Kutty on a day long date with Valli’s granddaughter. Or just look at how Madhumitha films the moment where Kutty is trying to strike a business deal with the mess owner, there are no dialogues, just capturing faces as realization dawns on them. There is another beautiful jump cut when a light from a torch (the same one KD stepped out of his house with) turns into the light from a theatre projector.

KD (a) Karuppu Durai is decorated by characters that we draw a lot of joy from but know very little about. Like the poultry man Muthu whose real passion lies in the greasepaint. Or the character played by Yog Japee who is a bit of a Miss Marple figure in the surroundings, adept at investigating missing persons cases. We know nothing about him but he is written and filmed in a way that clearly suggests that he is a loner, and therefore exactly the kind of person who’d understand KD. There is a mockumentary portion in KD (a) Karuppu Durai where people talk about the traditions practiced by the locals when a life passes. One of them says that, yes, people do erupt in joy, dance and sing, but it is not a celebration of death. It is the celebration of a life lived. Madhumitha celebrates two lives at crossroads and stays crafty while at it.